Do you want to convert your MTS videos into an audio file that can contain high-quality sound? You may want to consider exporting them to WAV, for this audio file is one of those that hold the most substantial quality of sound. With this being said, you may need a magnificent tool to do the job. Luckily, this post will bring out the most trusted and powerful MTS to WAV converters in the history of conversion.

Part 1. The Essence of Converting MTS to WAV

If you are the person who stocks file videos from a camcorder, due to some sentimental value you have for those recordings, and would like to enjoy them on different media players but you can't because they are in an MTS format. Or, you captured the video of your late loved one singing your favorite song or a podcast of a renowned celebrity that you want to listen to over and over again. These kinds of circumstances are one of the very reasons why you need to convert MTS to WAV.

WAV files are very dominant in holding a CD or DVD sound like. Therefore, exporting sound from a high-end video file, and saving them in a WAV format, would be a very great idea. Moreover, compatibility-wise, this audio format has been accepted by most of the media players at present.

Part 2. How to Convert MTS to WAV Like a Pro

Are you a beginner at this task? No worries, because with the help of the AVAide Video Converter, you can work like a pro. Furthermore, this powerful software has great help to the users in obtaining professional output within a very facile interface. In fact, you will also be given a chance to practice making your own movie, making video collages, and even a pro DVD ripper.

What's more, this ultimate tool has a very impressive Toolbox that contains every editing tool you will need to enhance the file. In addition, this tool also gives importance in time, for it has a very rapid conversion in a bulk process. Want to know how facile it is? Download and install it to your device, and follow the guidelines below.

Convert MTS to WAV Like a Pro With AVAide Video Converter

Convert MTS to WAV in bulk by uploading multiple MTS files. Drag and drop all the MTS files on the interface. Otherwise, tap the Add Files button located on the upper left part of the interface, then choose to upload an entire MTS folder or individual files. 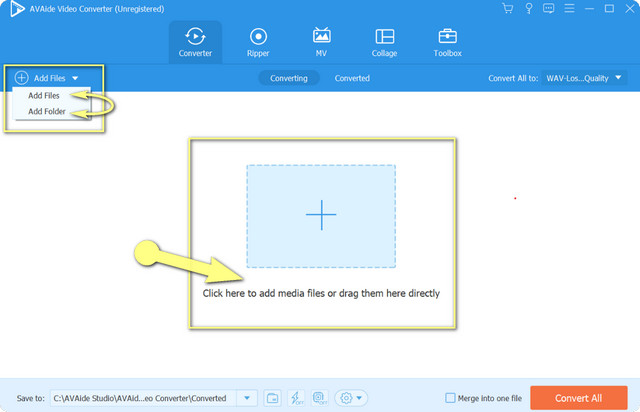 Step 2Presets the MTS to WAV

Go to the Convert All To portion, and click the Audio. Choose the WAV among the list of audio formats, then click on the Lossless Quality to proceed. 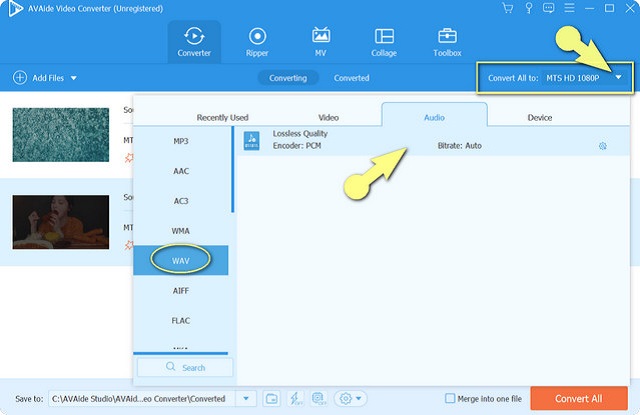 Note: You have the choice to modify the output by adjusting the bitrate, sample rate, channel, and the encoder by clicking on the Setting icon. 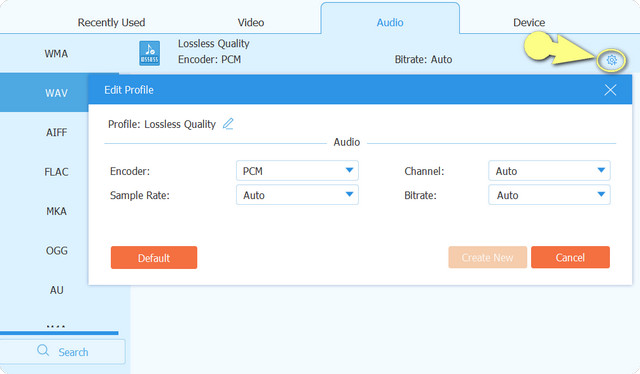 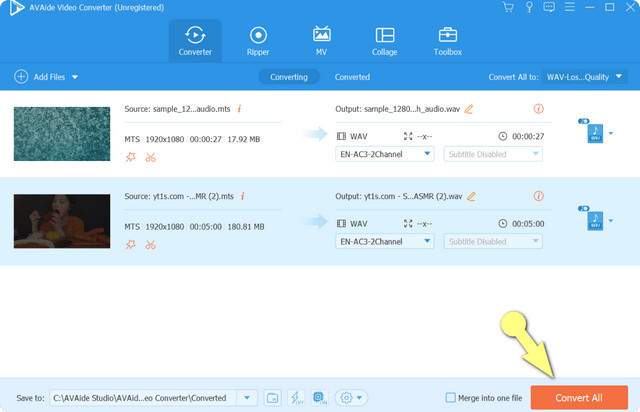 Check on the completed files from the popped-up window, or by going to the Converted portion. Actually, prior to the conversion process, you can already browse and select a folder for your converted files by tapping the Arrow from the Save To part. 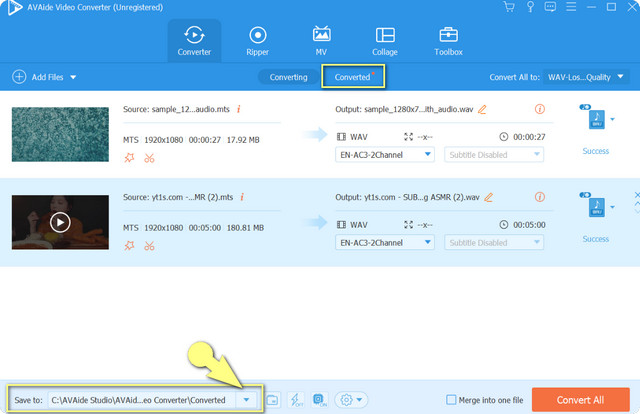 Note: To experience more of the powerful features such as the Ultrafast Conversion, feel free to try the premium version.

Part 3. How to Convert MTS to WAV For Free Online

If you happen not to agree on installing software on your device, an online solution would be the best option. As far as converting files such as converting MTS to WAV online is concerned, the AVAide Free Video Converter has been the number 1 choice. Furthermore, it has unquestionable security that extremely protects the users' files and data. In addition, just as the software version, it comes with an acceleration technology that works ultrafast on conversion.

What's more, despite being navigated on the web via the internet, you won't see any ads, as well as watermarks that could bother you while using it. Try it in any file format you need, for it supports numerous video and audio compositions. Are you excited to use it? You must see the detailed steps below first.

To have a smooth conversion process, a launcher must be installed. Visit the AVaide Free Video Converter website, then click the ADD YOUR FILES button. 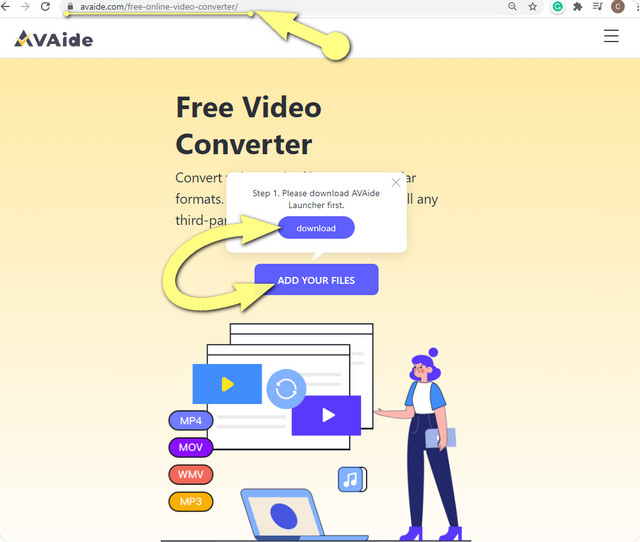 Once the launcher is acquired, you can click on the ADD YOUR FILES button again to load your first file. Then from the main interface, click the Add File tab that is on the left upper part, to load more files. 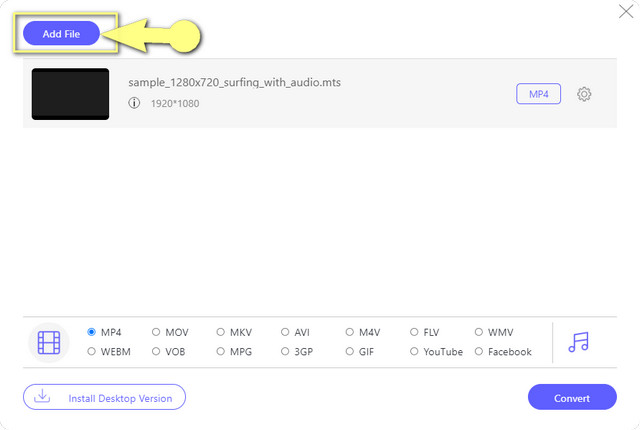 Step 3Choose the WAV as the Output

Since WAV is audio, you must choose from the list on the Note icon. Click each file and choose the WAV after. 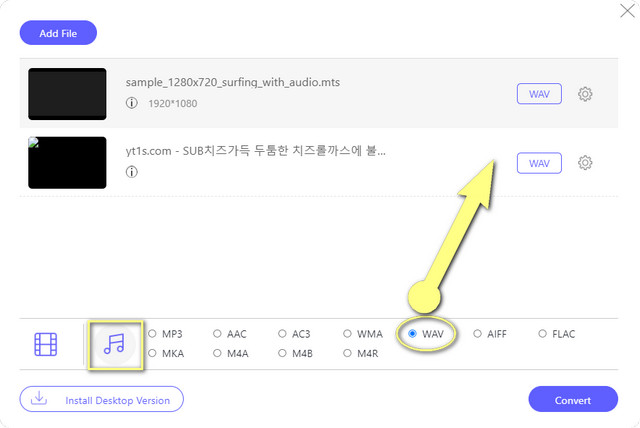 Step 4Save and Transform the Files

Finally, you can hit the Convert tab. Thus, before the conversion process begins, you must select a folder for the converted files, browse from the popped-up window. Subsequently, check the file destination when the process is done. 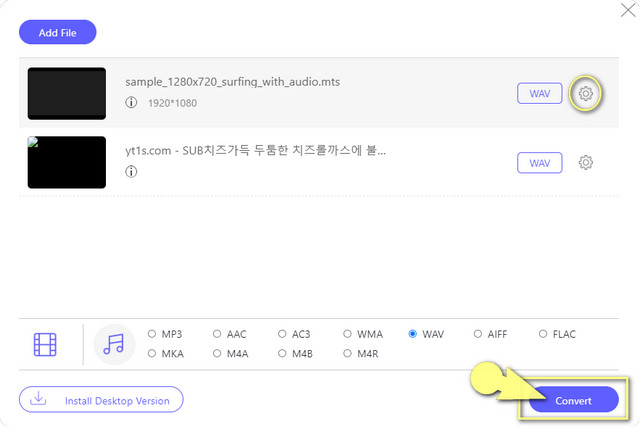 Note: This MTS to WAV free converter, also allows the modification of bitrate, sample rate, channel, and the encoder of the file. If you happen to need to adjust them, click on the Setting icon beside each file.

Part 4. FAQs About MTS and WAV

Can I convert MTS to WAV on Linux?

Yes. WAV files are supported by the Windows Media Player.

Can I playback the WAV on my Android?

Unfortunately, WAV files are not playable on Android. Hence, with the converter tools presented, you can transform the WAV to the audio format your Android supports, just like MP3.

Choosing the right tools to convert your files is something to be contemplated first. This is due to so many solutions we see on the web, but not really doing the task greatly. Therefore, this write-up only gives what is best for converting MTS to WAV. In fact, many experts have switched on the AVAide Video Converter when they tried it. There is no harm in trying, download it now and experience best when it comes to converting files.