FLV or Flash Video is used for video and animation online. FLV files can be viewed in a web browser or by using a separate media player. Despite its popularity, users find it hard to play FLV files to download because of the animations and advertisements that slow down the loading process. Moreover, downloading such files may take a long time. It is strongly advised to convert FLV to WAV online. Because the WAV format is supported by the majority of the devices and platforms we use. They can certainly work successfully whether they are offline or online tools. What is more surprising is that they convert fast and hassle-free.

Part 1. Comparison of FLV and WAV

FLV stands for Flash Video. It should be recalled that Flash Video is a patented file developed by Macromedia, which Adobe currently owns. More so, flash files are widely used on the Internet and are particularly prevalent in all the popular websites we use today. However, a flash player is required to view flash files. One of the drawbacks of FLV is limited compatibility. With that said, it is needed to convert FLV to WAV format.

WAV is a shortened form for Waveform Audio file format. One of the most basic file formats for storing audio data that can play uncompressed digital audio. This was invented by IBM and Microsoft. Furthermore, with its lossless format, you can perfectly duplicate recordings without sacrificing audio quality. Thus, WAV files are relatively simple to process and edit. This has resulted in the availability of user-friendly editor software at all levels and its compatibility with the many operating systems.

Get the AVAide Free FLV Converter launcher to your PC at once. Tap the ADD YOUR FILES button, and from the window that will appear, click Download, then Open. 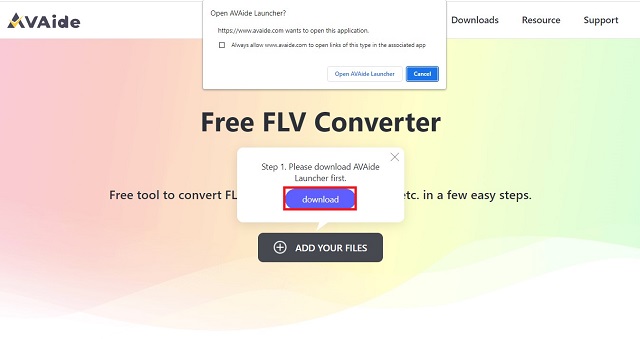 To convert FLV to WAV, upload FLV files by clicking the Add File button on the right upper left part of the interface. 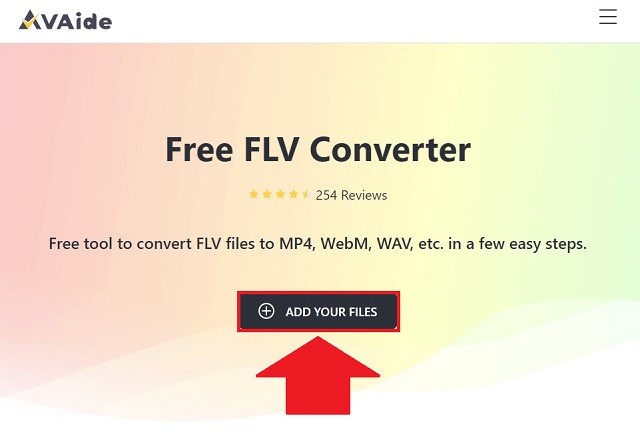 Set the uploaded files to WAV from the portion located at the lower part of the interface. After that, click the Convert button to start the conversion. 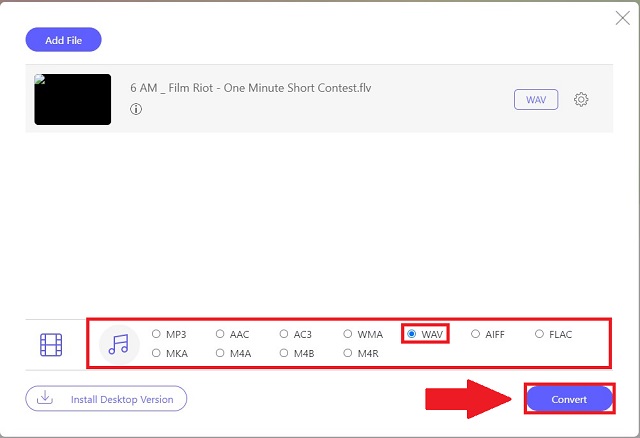 After clicking the Convert button, your file storage window will appear. Before the conversion process, you must choose storage where the converted files are saved. 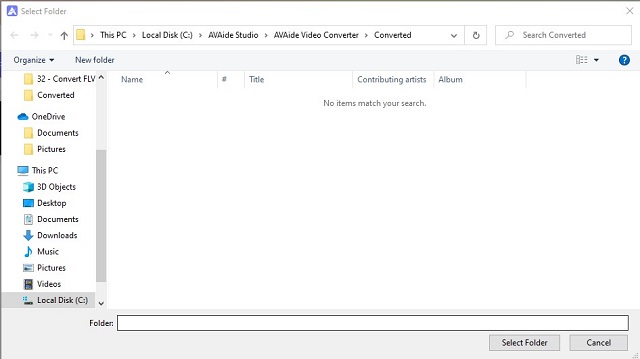 It takes less than a minute to convert. So, you will be notified once the FLV file has been converted to WAV.

Convertio is a web-based application that converts files between different formats. Along with common audio and video conversions that this tool offers, it also allows you to convert documents, images, eBooks, audio, and even slideshows that can be converted in different formats such as SNB, EPUB, AZW3, PDB, TCR, FB2, RB, and MOBI formats. The input file size for this tool is only 100MB. Below are steps on how to convert your FLV to WAV for free.

Choose files from your computer, Google Drive, Dropbox, a URL, or by dragging them on the page.

Click the Arrow Down beside to. Then, tap WAV on Audio.

Begin the conversion by clicking Convert. After that, you can download your WAV file right away. 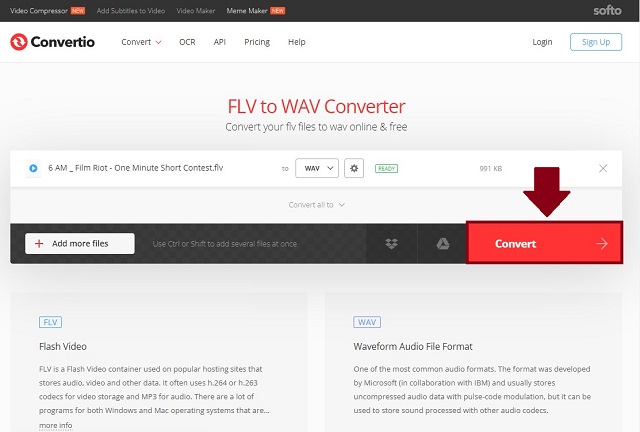 3. Making Use of Zamzar

Zamzar is an online file converter that simplifies the process of converting many types of files, including videos, music, documents, and photos. It has only a 50MB file size limit. Despite the file size restriction, your conversion may be delayed by approximately an hour if the site is receiving excessive traffic. Without further ado, the instructions below are provided to help you convert FLV to WAV for free.

Select the FLV file you wish to convert.

Click WAV as the format you want to convert your FLV file.

Click Convert Now to convert your FLV file. Wait for the conversion to complete. 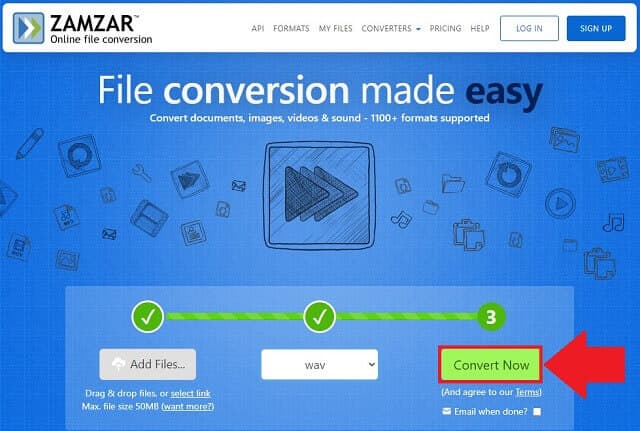 Part 3. Professional Way to Convert FLV to WAV on Mac and Windows Offline

AVAide Video Converter is a preeminent converter that works well in transforming your audio file into other formats while preserving its quality. It has acceleration technology that will give you a 30x faster conversion. Your files can be edited, rotated, cropped, trimmed, divided, merged, enhanced, and compressed before even converting them. Additionally, the interface of the AVAide Video Converter is so simple that even non-techies can use it. As a result, if you're looking for a tool to help you convert files quickly, this AVAide Video Converter is an excellent choice. With that said, here are the steps for free FLV to WAV conversion on your device.

To start, go to the AVAide Video Converter official website. Download and install the app on your device.

Then, upload all your original files from your local storage by clicking the Add Files button. 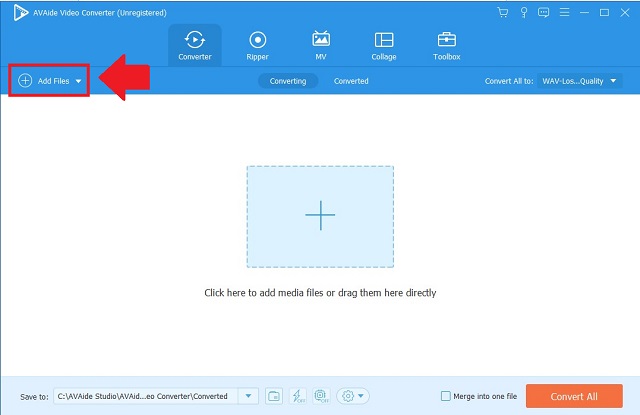 After that, click the Convert All to button and select WAV as the output format. 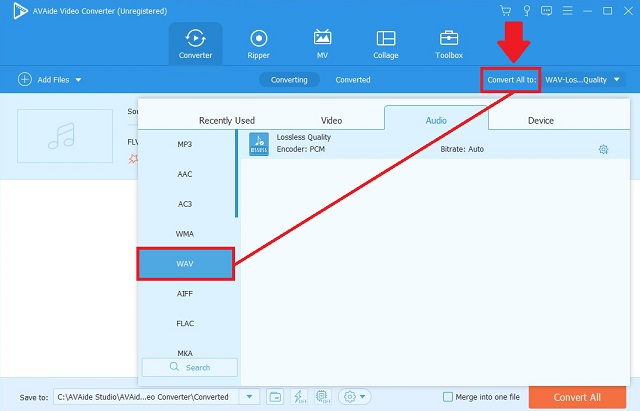 Upon choosing the desired format, click the Convert All button to start the conversion. 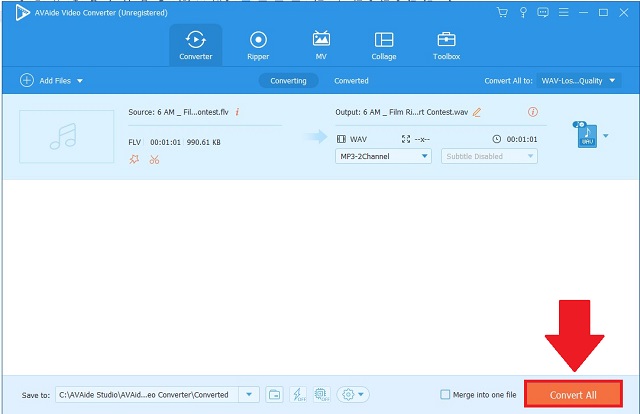 Finally, when the process is complete, you can now check your files on their file designation. 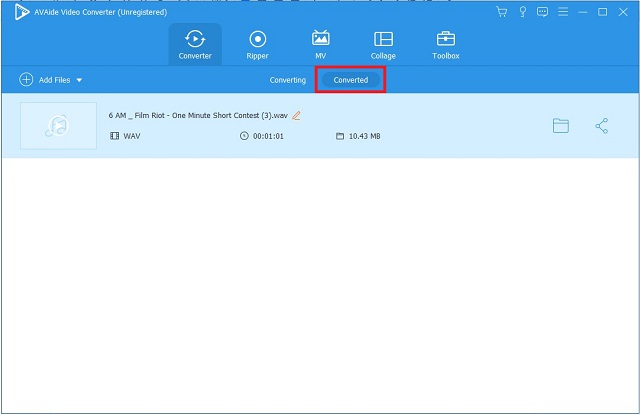 Part 4. FAQs about FLV and WAV

Why can't I open an FLV file on my Mac?

To playback an FLV file, you opt to install a compatible media player or convert your FLV file on AVAide Video Converter immediately.

How do I convert a WAV file to an MP4?

The simplest way to convert WAV to MP4 is to use an online file converter such as AVAide Video Converter. It will provide you with a simple option for converting your file 30x faster than standard converters.

Can I use VLC to convert FLV to WAV?

Yes, VLC allows you to convert FLV to WAV. But, if you are looking for a hassle-free and easy-to-use converter, you may use AVAide Video Converter.

To summarize the article, the converter tools mentioned are the best option for quickly converting your file. AVAide Free FLV Converter, Convertio, and Zamzar all convert our files well. However, I believe that AVAide Video Converter is the best of all of these converters. It is a reliable tool. So don't be afraid to give it a shot.