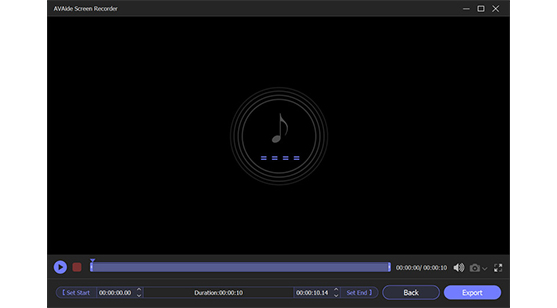 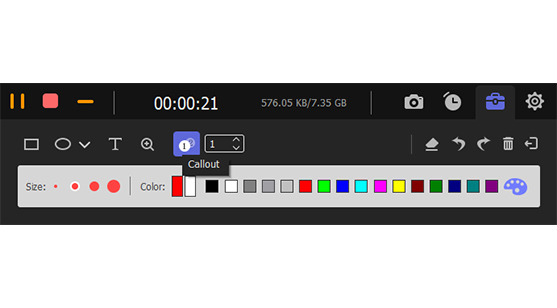 iPhones, as well as iPads, are some of the high-end devices of Apple. We cannot deny that these said iOS devices have great functionality that gives their owners confidence and make them satisfied too. On the other hand, screen recordings have been given importance, especially since the pandemic started. Henceforth, many have taken into consideration capturing their special online classes, meetings, and special activities, even games they do on their device.

However, videos alone won’t be enough because they should be accompanied by sound. Audio or sound makes a huge difference in recording because the significance of recording was purposely made for it in the first place. Now, if you are one of them and have the exact reason why you’re here to learn how to screen record with sound on iOS 11-15, then we are very willing to assist you. Best solutions with comprehensive instructions will welcome you to this post. So, without further adieu, let’s get the learning started.

This bonus part will let you record your desktop screen and audio in excellent quality. AVAide Screen Recorder is the most exquisite screen, game, audio, webcam, online course, video conference, and movie recorder that you could have on your Windows and Mac computers. Furthermore, its audio recorder is unlike others, for it lets you record your system sound and microphone with its built-in noise cancellation and enhancement features. Not just that, this AVAide Screen Recorder can also extend its outstanding features in screen and audio, mirroring your iOS and Android devices.

What else? While facilitating the screen recording which sound, this fantastic software allows you to screenshot and add voiceover that is also produced in high-quality outputs. And of course, as part of the gentleness of the tool, aside from having an easy-to-understand interface, it also provides hotkeys that you can easily remember.

Step 1Get the Recording Software

Download and successfully install the fantastic software to your desktop by clicking the download buttons above. After that, launch the software immediately.

Upon reaching its main interface, hover to the correct recording tool you need. For this task, choose the Phone recorder, and select the iOS Recorder on the next window.

Now, select the Screen Mirroring selection and you have to make sure that your phone is connected to the same wifi your desktop is connected to. On your iPhone, follow the guidelines that you will see in the window to connect. 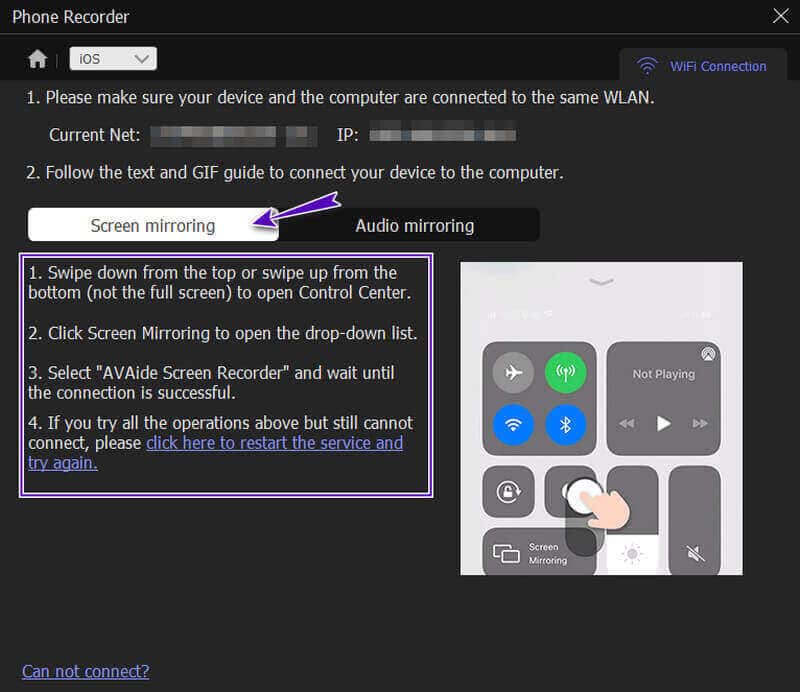 Once your phone is connected and ready for mirroring, go to the Recording Content option to set the sound source. Then, hit the Record button to start the recording. 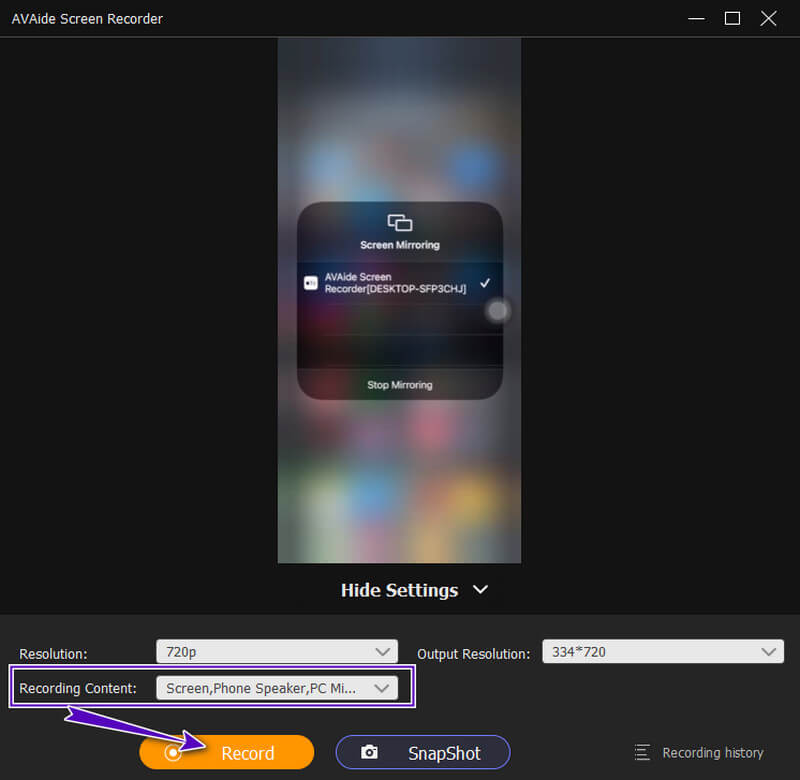 After the recording hit the Stop icon, make the necessary adjustments or hit the Export button to save the recording.

Note: Same guidelines are applicable on Mac. And you can also use it to record audio on iPhone separately.

Part 2. Default Way to Screen Record with Sound on iPhone

Please acknowledge that recording screens with sound will be much easier for iOS 11 and up. This is because these devices, specifically the iOS 11, have a screen recording feature that tags as Screen Recording. It is a built-in tool that will enable you to easily capture your entire screen and the system audio, sound, or voice from your phone. However, you must not also disregard the remarkable ability of third-party apps that can significantly impact recording your screen. But don’t let this information bother you because we will impart only the best recording apps that can give you the perfect sound for a recorded video.

You have to enable the recoding tool by going to the Setting and then to the Control Center. Now go to Access Within Apps and swipe it on, then find the Screen Recording among the apps to add. 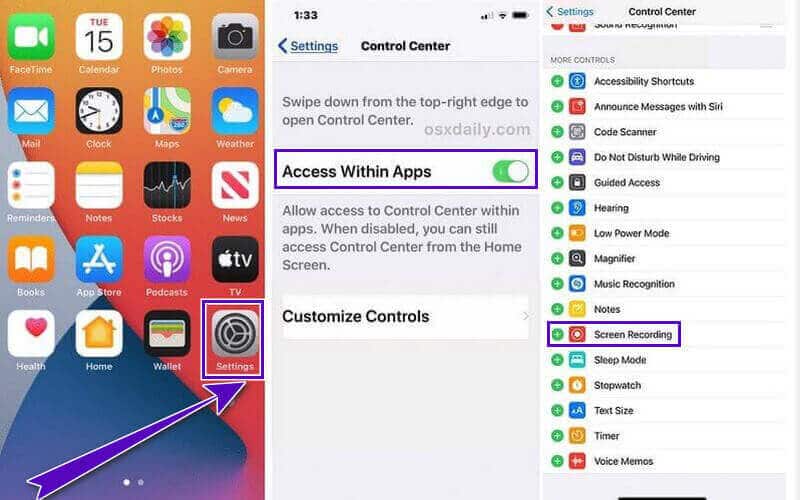 You may now begin to record your screen with sound. Swipe down your screen, head to the icon of the Screen Recorder, and tap it to launch. This time, you can now start playing the video or any file you need to record. You will surely notice that the recording is ongoing because the red portion will be shown at the top of your screen.

Step 3To stop or finish the recording, click the red potion. After that, tap the Stop selection on the small window.

Part 3. How to Screen Record with Sound on iOS 11 Using an App

As we mentioned, you should also consider acquiring an excellent recording app. For this reason, the best option you can have is the Recordit. This recording app contains all the necessary tools to do your screen recording tasks, such as capturing face cam and commentaries. In addition, this app contains a video editor with multiple options to produce a perfect recording for you effectively. And to support this information, here are the complete guidelines on how to use the Recordit app on the recording screen and sound on an iPhone.

Step 1Get the App

Download and install the app from your app store. Luckily, this app is free to get.

Once downloaded, launch the app and tap the Record icon at the center of the interface. Now, tap the Start Broadcast option on the new window to begin the recording.

Now, to end the recording, get to show the recording navigation again and hit the Stop Broadcasting tab. Subsequently, your recorded file is automatically saved. 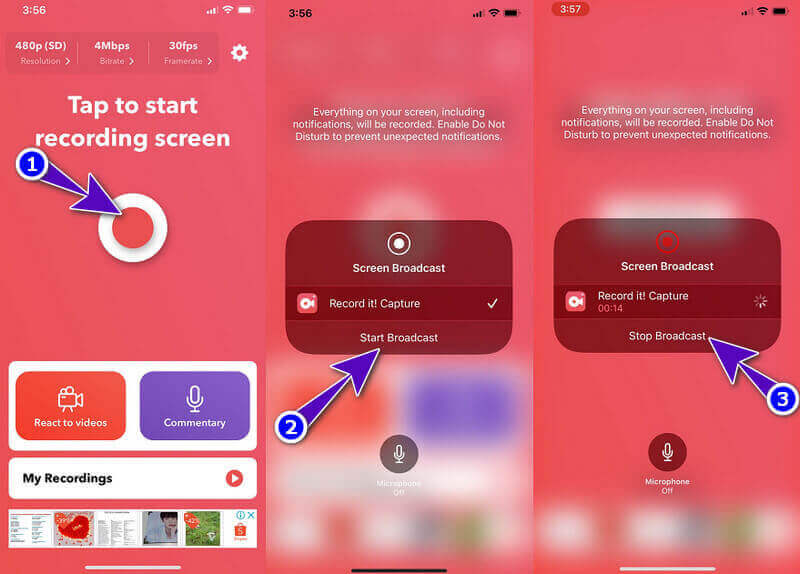 Yes. You can use the iPhone’s built-in screen recorder to record screen on iPhone without sound. How? Just unclick the mic button before you begin the recording.

2. Can I record the sound on QuickTime?

Yes. QuickTime lets you record your screen, movie, and audio.

3. Can I record the screen and sound on Android?

iPhone’s built-in screen recorder is an excellent choice for recording your screen and sound. However, if acquiring a third-party app has never been an issue, then you must try the other solution. Likewise, AVAide Screen Recorder will let you make iPhone screen recordings with audio excellently on your desktop and Mac. It also works as a desktop recorder that lets you screen record on Windows and Mac smoothly with optimal quality.